With the warm seasons come thunderstorms — and most of us have enough sense to go inside as soon as we hear the first rumble of thunder. But are we completely safe once we’re inside?

In 2017, a New York man was struck by lightning while sitting inside his auto repair shop. A couple years before that, a Colorado man was struck inside his garage while taking video of a passing thunderstorm. The New York man noticed a tingling in his left hand while surveying a computer that had been fried during the storm and only then realized that he, too, had been struck.

But how likely is it for lightning to find you inside a building? Honestly, not very.

Is It Dangerous To Run Water Inside During A Storm?

What’s most important is for you to get indoors. At that point, try to avoid anything plugged into the wall or anything attached to your plumbing, which would include showering or doing the dishes. If lightning were to strike your house, or even close by, the electrical current could travel through your home using the wiring or pipes.

Most of the time, that means a TV or some other plugged-in appliances get fried as the current makes its way to the ground. But if you happen to have your hands in some dishwater or are taking a shower, that electrical current could move straight through you.

This is better-safe-than-sorry advice: While this could happen, the chances of it happening are very slim.

How Common Are Lightning Strikes?

Over the last 10 years, there have been an average of 28 people struck and killed by lightning every year, according to the National Oceanic and Atmospheric Administration. Every single one of those lightning deaths happened outside, which is where you’re much more likely to get struck. 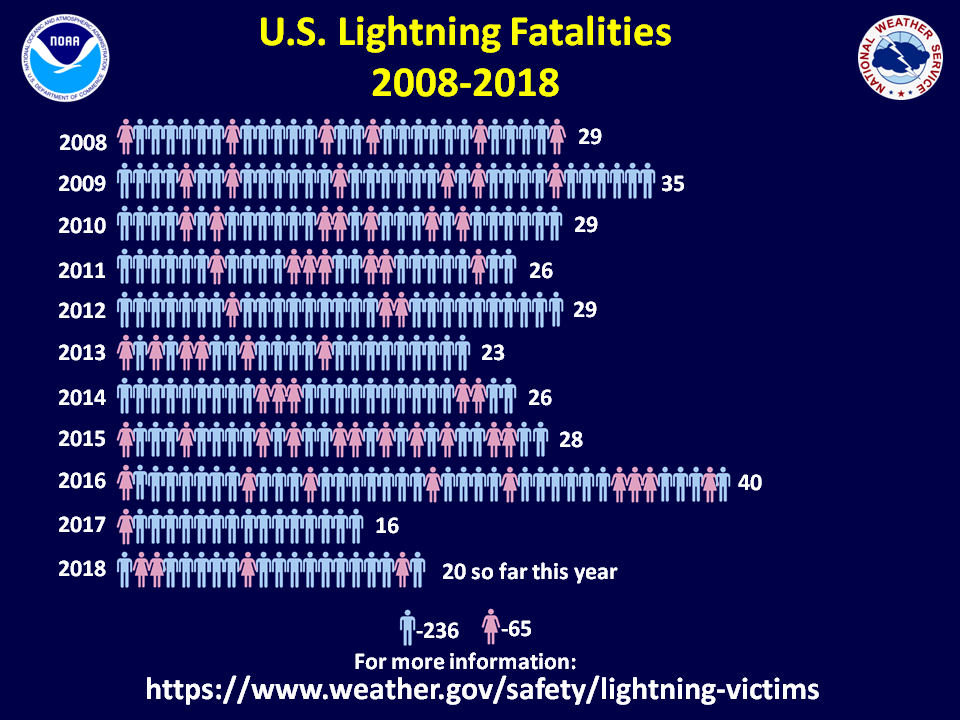 In a 2017 study, the National Weather Service found most victims were just enjoying the outdoors before a thunderstorm quickly moved through and struck them. The study, which looked at deaths occurring from 2006-2016, identified the outdoor activities most commonly associated with lightning deaths.

Fishing accounted for the greatest number of deaths, with beach-going, camping, ranch/farm work and boating following behind, so take particular caution when engaging in these activities during the summer. Other activities during which you should look out for lightning strikes include soccer, yard work and golf.

Of course, for everyone who’s died from a lightning strike, there are many people who’ve survived them, too.

That’s because getting struck by lightning is rare — and dying from it is even rarer. Neither is worth the gamble, however. Because even if you don’t die from a lightning strike, it doesn’t mean there aren’t other lifelong side effects.

Lightning strike survivors have reported neurological disorders, chronic pain, as well as mental and emotional illnesses. Survivors typically have to deal with one or more of these symptoms the rest of their lives.

How To Assess Your Risk

Most lightning strikes happen in the spring and summer when thunderstorms are most common. The National Weather Service has identified June, July and August as peak months for lightning activity across the country.

And remember, if you can hear thunder, you can be struck by lightning, even if the skies above are still blue!

So the next time there’s a thunderstorm, the best thing you can do is go inside immediately. It may be an inconvenience at the time, but it’s not worth a lifetime of pain and suffering.