How cool is this?! 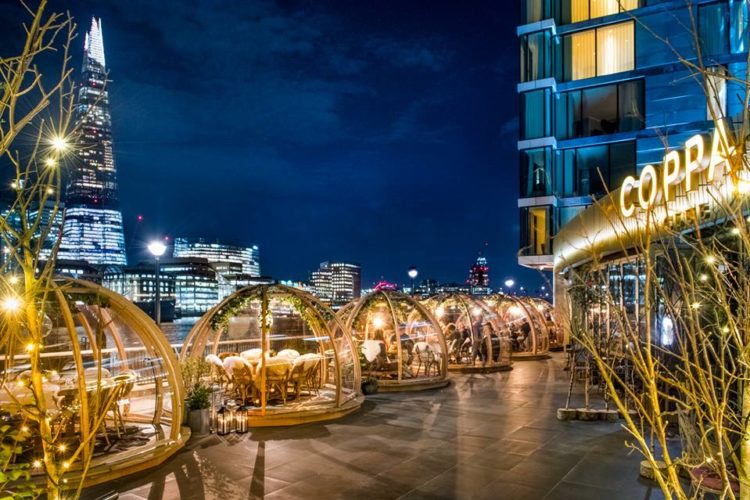 A restaurant in London has dreamed up a genius solution for its guests who want to dine alfresco all year long: luxe, heated igloos outfitted with cozy throws, couches and twinkling strands of lights. Swoon!

Coppa Club—a restaurant and bar located next to the Tower of London (and the ice rink that’s set up during the holidays)—brought back its wildly popular igloo concept for the current winter dining season.

The restaurant (which describes itself as serving “unfussy” European fare) first debuted the igloos in the the 2016-2017 winter season, but the zippered entries proved difficult for waitstaff to get in and out of the structures, and the zippers apparently kept popping off. To remedy the problem, Coppa Club custom engineered its spherical structures with timber and Perspex and equipped them with sliding doors. Diners can press a button inside the igloo to get the attention of their server.

Happy New Year’s Eve! Time to celebrate some of our favourite moments from 2017, here’s to more of the same in 2018 💫⠀ #coppaclub #bestof2017 #annualhighlights #newyearseve #starttheshowreel

The igloos, which can comfortably seat up to eight people, are perched on the restaurant’s sprawling patio and alongside the Thames River.

The popularity of outdoor dining during the warmer months at Coppa Club prompted the idea for the igloos.

“As soon as it got colder, we thought ‘OK, we have to create a space where people can be sitting outside all year long,’” Theresa Obermoser, Coppa Club design manager, told Business Insider.

Already imagining yourself sipping on an espresso martini or eating a sourdough pizza inside the igloo? Fair warning, the reservations get snapped up almost as soon as they’re released, which is about a month in advance, according to the restaurant’s social media channels. But, a trio of the igloos are available for walk-ins if you want to try your luck.

Can’t make it to London for a dinner this winter? Fret not. Come warmer weather, Coppa Club transitions to open-air timber cabanas that are are also beauties, looking as though they could set a scene of “A Midsummer Night’s Dream.”

So no matter when you may take a trip to England, you could dine in beautiful, outdoor luxury at the Coppa Club. For what it’s worth, the indoor bar looks pretty spectacular, too!

Of course after dining under the stars in an igloo, the natural progression is to sleep in an igloo under the Northern Lights, right? You can do just that in a one of these Finnish igloos constructed with glass and steel.

If you’re interested in unique vacations, try a stay at this hotel–that floats in the middle of the ocean!

Trouble Sleeping? Here's Everything You Need to Know About Moon Milk