Will you try to get your hands on the salty and sweet new bar? 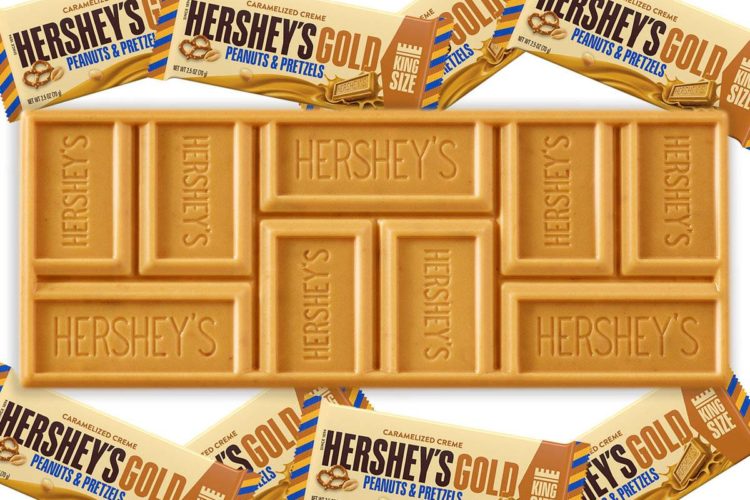 Hershey’s chocolate is a classic, and it’s not every day the company releases a new flavor of their famous chocolate bars. In fact, it has not debuted a new candy bar in 20 years (the Cookies n’ Creme bar came onto the scene in 1995). But all that just changed: Hershey’s announced the addition of a fourth bar to their roster, and it’s going to blow your mind.

Say hello to Hershey’s Gold, a “caramelized creme” bar made up of peanuts and pretzels. Sweet and salty lovers are going to go crazy over this bar!

Cocoa lovers, however, might be surprised to find that this bar doesn’t actually contain any chocolate. Instead, it’s made with a white creme that is cooked until golden, creating a slight caramel-like flavor and giving rise to its flashy name. Thanks to the peanuts and pretzels, the bar is sweet and salty and creamy and crunchy, creating a combination that definitely could take the gold.

(The company apparently isn’t marking the dates that “with nut” versions of their classic bars were added to their roster—sorry, Hershey’s Special Dark with Almonds!)

According to Delish, it’s the first time a mass-market candy company is offering caramelized creme. Even the way the bar is divided looks different from its original chocolate bars: It contains two different sizes puzzle-pieced together both horizontally and vertically.

Hershey’s Gold was announced on Nov. 1 to kick off the 100-day countdown to the 2018 Winter Olympics in PyeongChang, South Korea—which makes sense given the bar’s name and Hershey’s sponsorship of Team USA and the United States Olympic Committee.

However, candy lovers have to wait until Dec. 1 for the official Hershey’s Gold release. So sit tight—you’ll have to wait a month before getting your hands on this sweet treat! But something tells us that it’s totally going to be worth the wait!

It looks like Hershey’s employees have been treated to a sneak peek of the bars. One who says she works at Hershey’s Chocolate World, compared the new bar to peanut brittle.

While others questioned it if would taste too sweet.

Looks like something that would cause a month-long sugar rush. #HersheysGold

And others urged the chocolate company to stick to the original.

#HersheysGold why? Just make the same flavor with the same shape forever. Or add a gold wrapper if you want to get crazy. #purist pic.twitter.com/s7ERX9M5A6

5 tips for getting better TV reception with your indoor antenna

8 clever uses for bacon grease you probably haven't tried yet